Stop by and say hi to Dawn and Sam

Please welcome Dawn and Sam, along with Liza Oconnor as they tour about on the Worst Blog Hop ever 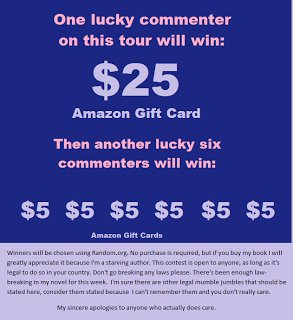 Liza: Today, I am on Patricia Bate's blog interviewing my main characters.
Peep Rep: Liza, I just got word for my source in NYC precinct 120. Carrie and Trent have both been arrested. So you need to cancel.
Liza: I'm not canceling. *dials bat phone* Sam, grab Dawn and get to Tricia's blog at once.
Peep Rep: The reason I didn't just bring them with me is because they were busy.
Liza: Busy with what?
Peep Rep: *rolls eyes* You know.
Liza: If I knew, I wouldn't have asked you.
Peep Rep: Doing what's needed to make little baby bunnies...
Liza: Their breeding rabbits? God, what a terrible waste of time and money.
Peep Rep: *rolls eyes* No I meant, never mind I see the limo now. 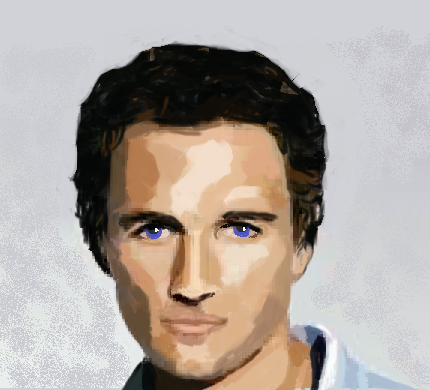 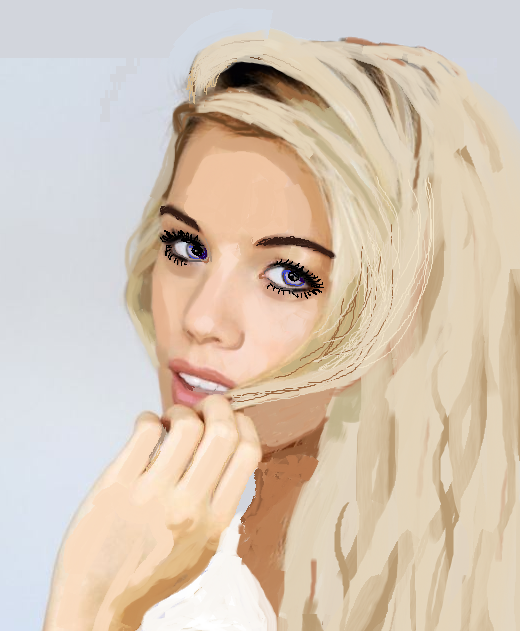 Liza: Sit down both of you. I need to interview you.
Sam: Are you kidding me? Dawn and I were five seconds from having the best orgasm in the history of the world!
Liza: You can have it later. It's not like you two don't break the former world record every other night.
Dawn: *laughs* She has us there.
Sam: So why aren't you interviewing Trent and Carrie. Oh wait, you actually wanted a couple who knew how to finish the evening.
Liza: Love and 'concluding the evening' are two separate things. The reason I've called you in is because Carrie and Trent have been arrested--

Liza: Wow, I can't believe he just drove off like that. I'm the author. I could crash his car.
Dawn: Don't let me stop you.
Liza: Are you mad because he left you?
Dawn: I'm mad because he has a thing for that under-aged midget.
Liza: Okay, first of all Carrie is 24 years old and while at four-foot-six she is shorter than most people she is neither a midget nor a dwarf.  So back off before I give you grief over your bleached-out hair.
Dawn: It's just that I really like Sam, but when he brought Carrie to his bar and got her drunk by having me place dark whiskey in her cola glass, I realized he was interested in her.
Liza: Yes, he is.
Dawn: Damn it! I knew that was the case! This always happens to me.
Liza: Sam likes to steal Master Trent's toys, and Carrie is Trent's favorite toy.
Dawn: Are you sure?
Liza: Never question the author. Of course I'm sure. So what do you think of Sam?
Dawn: I really like him, but I've been played enough times, I'm cautious. He's always running off to save someone.
Liza: And you think that's a bad thing?
Dawn: Not if it's true. But some of his excuses are ridiculous.
Liza: Those are probably true. I'd be more concerned with any excuses that sounds credible.
Dawn *smiles* I feel better now.

Sam: Sorry Love, I had to rescue Master Trent.
Liza: I hope you rescued Carrie as well.
Sam: *glances at Dawn.* Trent insisted then almost got her arrested again in the process.
Dawn: *smiles* Can we go home and work on breaking the world's record again?
Sam: If you still need an interview, Trent and Carrie can be found swimming in an absurdly large Jacuzzi. *Tugs Dawn up.* Let's go be all that we can be.
Liza: And away they go.

Liza: I don't understand why interviewing my characters is so much harder than interviewing other people's characters.
Peep Rep: That's because yours come from a deranged mind.
Liza: Let's talk about my book instead. 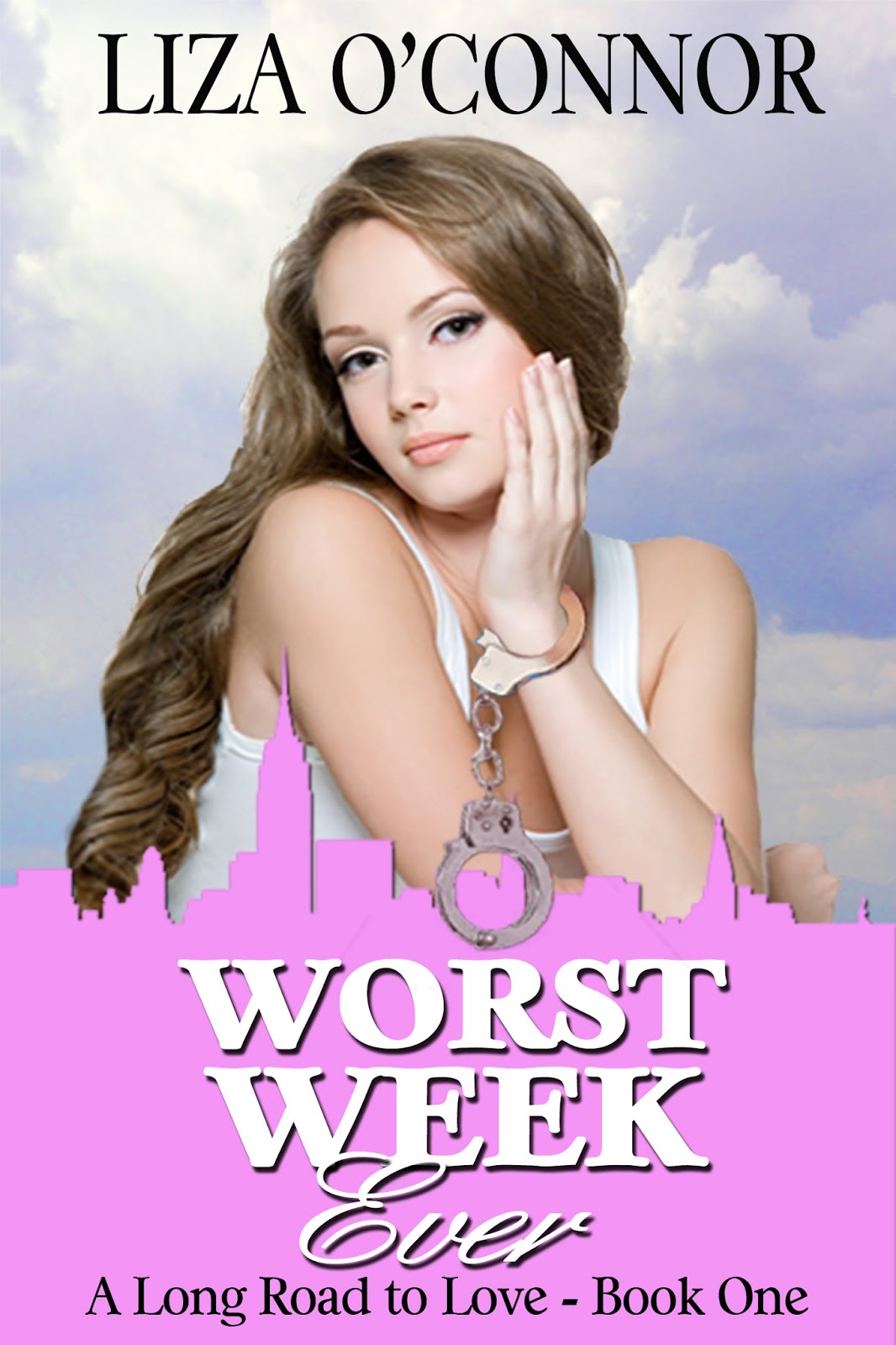 Worst Week Ever
by Liza O'Connor
New Adult, Humor, Contemporary
Coming July 15th
BLURB
What do you get when you put a hardworking, can-do middle-class young woman together with a egoistical, outrageous, billionaire boss, then throw in the worst week of disasters imaginable?
Book 1 of the 3 book series A Long Road to Love.

Trent Lancaster spends one month without his Executive Assistant, or as his drivers refers to Carrie: 'Trent's brain, left hand, and right hand'. He's had a miserable month without her at his side and to ensure it never happens again, he intends to marry his brilliant beauty. Only given all the times he's threatened to fire her, he's not sure she even likes him. However, the future of his company and his happiness depend upon him succeeding, so Trent begins a slow one week seduction that happens to coincide with Carrie's Worst Week Ever when everything that can go wrong does so in hilarious form.
(Hilarious to the reader--Carrie is not having much fun this week.)

EXCERPT
The door burst open and Trent strode in, followed by a man dressed in a black suit, carrying a tray of food. “Good, you’re finally awake. Saves me from having to throw cold water on you.”
Trent sat on her bed as he pointed to the desk. “Put her breakfast there.”
“On the one of a kind, heirloom desk, which has been in your family since 1845?” his butler asked.
“Yes.”
“No!” Carrie yelled over him. “Let’s put it on the bed stand.” She pushed the Tiffany lamp further back to make room.
“Thank you, miss,” the butler said as he placed the silver tray on the stand and then stepped back. “Will there be anything else?”
“No,” her grumpy boss snapped. The moment the butler stepped into the hall, Trent slammed the door closed and glared at Carrie. “Do not countermand my orders to the staff. They’re impossible enough already.”
She chuckled. “I’m sure they say the same about you.” The tantalizing aroma of her food caught her attention. Unable to resist, she peeked beneath the silver lid.
Trent sat a foot away from her on the bed and sniffed at her plate. “I told the cook she’d be fired if you didn’t eat it.”
“If you actually said that, you should go downstairs and apologize. You appear to have a wonderful cook and should value her.”
He shrugged. “She’s okay. Not as good as the last one though.”
Unwrapping her fork from a swaddling of fine linen, Carrie dug into the egg-white omelet. Her eyes rolled in ecstasy. “God, this is fabulous!”
“Really?” He moved closer and stole her fork so he could try some.
She expected him to smile at first taste. Instead, he became annoyed. “Come on! Your taste buds can’t be that jaded.”
His eyes narrowed. “It’s very good. Far better than the crap she feeds me.”
Carrie shook her head and swiped the fork. If the cook prepared Trent mediocre meals, she understood why. During her first six months at Lancaster Chairs, Trent had threatened her with unemployment on a daily basis and she’d hated it. She nearly grew to hate him, would have, except his remarks always lacked sincerity, as if he’d learned them rote.
Once she’d consumed a quarter of the omelet, she offered him the fork. He smiled and shook his head. “You finish it. The cook will serve me my gruel later. Probably spit in it for good measure.”

Liza lives in Denville, NJ with her dog Jess. They hike in fabulous woods every day, rain or shine, sleet or snow. Having an adventurous nature, she learned to fly small cessnas in NJ, hang-glide in New Zealand, kayak in Pennsylvania, ski in New York, scuba dive with great white sharks in Australia, dig up dinosaur bones in Montana, sky dive in Indiana, and raft a class four river in Tasmania. She’s an avid gardener, amateur photographer, and dabbler in watercolors and graphic arts. Yet through her entire life, her first love has and always will be writing novels. She loves to create interesting characters, set them loose, and scribe what happens.

Liza's Blog and Website Facebook Twitter
Don't forget to leave a comment and provide your email address to win one of the tour prizes.
Want to increase your chances of winning a prize?
Follow Liza's Craziest Blog Tour Ever
through all its stops.

Posted by Patricia Bates at 6:46 AM