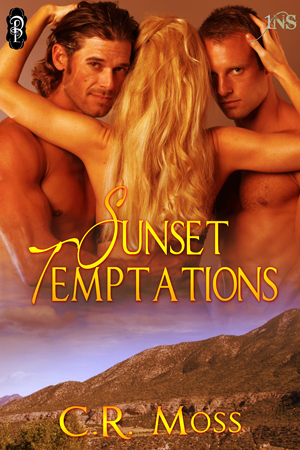 Interview with Ivy Tramonto… & Tour and Hunt Info!C.R. Moss asks her character, Ivy Tramonto of Sunset Temptations, some unique questions and receives some interesting answers!~ What do you do for a living?
Ivy: I’m a Las Vegas Entertainer – dancer, actor, acrobat – and I worked in a big show on the strip.
~ Where are you from originally?Ivy: I was born and raised in Las Vegas, NV

~ Would you go on one of the ghost hunting tours down in the city?Ivy: Sure would! I think it’d be fun!
~ Hmmm… Being so close to Rachel, NV, Area 51, and the Extraterrestrial Highway, I have to ask – Do you or don’t you believe in aliens and UFO’s.Ivy: Actually, I do believe in that stuff. Cue spooky music. LOL! Interesting couple of questions considering I’m in a Contemporary Chick Lit Erotic Romance story and not Paranormal. ;)
~ You have a point. Okay, we’ll get back to the smexing… What attracts you most to a potential mate?Ivy: I really like guys who are intelligent. ~ What body part do you like most on a person?Ivy: It’s a tie between eyes and ass for me.
~ What’s the sexiest thing you’ve noticed about your date?Ivy: Robert’s accent. I love hearing him talk. He sure had me swooning.
~ Have you ever had sex outdoors?Ivy: Yep! Up in the trails in the Red Rock Canyon area.
~ If you could spend a naked weekend with your partners, would you?Ivy: Hell yes!
Get ready to be tempted…~ Blurb for Sunset Temptations – a 1NightStand story from Decadent Publishing ~
(Book Content / Warnings: Contemporary, Erotic, Chick Lit, Romance, Menage, Alternative / Oral, anal, GLBT, [MM, MMF, MFM])Can wishes come true in just one night?* Roommates, Ivy Tramonto and Kiran Emerson, are heading out for their blind dates set up through a prestigious matchmaking service. Neither know anything about the men they’re to meet at a charity event being held in a mountain resort, but they’re looking forward to the adventure and forgetting about all their problems for an evening.* Resort owner, Robert Bourbon, doesn’t have time to play the field, especially when he wants a polyamorous relationship. After requesting the services of Madame Eve, he’s matched with the perfect pair and believes life can’t get any better.* Everything seems to be going great, until a mistake one of them made comes back to haunt them.* Will they make it through the dilemma or will they miss out on having their true desires granted?
~ Excerpt ~
“Sir, Miss Tramonto and Mr. Emerson have arrived. They have checked into the suites on either side of your penthouse as you requested.” Brandan fingered the screen of his tablet, then held the device out. “I need you to sign the contract for the adventure group coming in.”
“Thank you.” He looked over the electronic document, pulled his stylus from inside his jacket, and signed it. “I’m glad they arrived a few hours before the event. It will give us all time to get to know one another.”
“Would you still like to meet Miss Tramonto first?” The adjunct one-handed typed on the screen. “There. The contract is sent. I will contact Miss Tramonto if you don’t need me for anything else.”
“Yes. Please call her suite and have her ready herself for the evening. Once she is, show her to the Juniper Patio. Don’t forget to give her the sunset-colored rose.” Robert strode over to the mirrored wall behind the built-in bar and readjusted his tie. He liked the charcoal gray against his black dress shirt.
“I won’t, sir. What of Mr. Emerson?”
“After you see Miss Tramonto to the patio, visit Mr. Emerson at his suite and tell him I’ve been detained in a meeting. Have him wait in the Shadscale Bar. I will find him there in a bit. I need to keep them separate until the right time presents itself.”
“As you wish. Also, Mrs. Lawrence is looking for you to go over the schedule for the evening.”
“Good. I’ll be right with her. Anything else?”
“No, sir.” Brandan nodded and left the room.
Robert strode over to his desk and opened the files on his matches. Ivy Tramonto’s paperwork listed her as a blue-eyed woman with honey-gold hair. It also mentioned her being an adrenaline nut who loved the outdoors. She had worked on the strip in one of the acrobat shows until recently. The same went for Kiran Emerson. Both were good looking, athletic, adventure seekers. Madame Evangeline had also said they were friends, lived together, and occasionally were intimate. Both had fantasies revolving around participating in a threesome.
Perfect. Just the kind of companions I’d hoped for.
With a chuckle, he closed the folders. He knew at least three people who’d be granted their desires tonight, even if they weren’t official charity wishes.
More on ‘Sunset Temptations’ and links for where you can buy the book can be found at: http://crmoss.com/books/sunset-series/sunset-temptations/ Find C.R. Moss & links to her other social media outlets at:Website: http://crmoss.com/Blog: http://crmoss.blogspot.com/ Come out to the hottest readers’ conference in the west, Hot Mojave Knights, and meet C.R. & other great authors ~ Las Vegas, NV - October 2013 ~ http://www.hotmojaveknights.com/